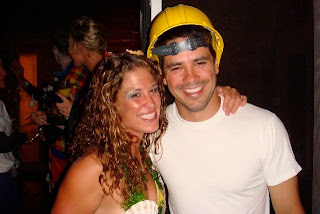 One would think a person like Freddy K would have a strict work-out regimen, be studious in his preparation for jumping, and single-minded in his focus to be the sickest jumper out there.

Its not any normal person that puts up stats like this:

Right. So, something like that would make you thing, what a dork, he proably sits at home on friday night and sharpens his fins and spends hours in a wind-tunnel making sure he maintains the proper co-efficient of lift while airborne.

HAHA, sucker! Nope, his life is cooler then ours.

On his website, he has a nifty photo album page, "A Peek Behind the Curtain" and has some fun pictures from Halloween.

You win the CRB award for the day, come to our offices to collect your prizes. One series of tubes, a diet pepsi and a nice deli-tray of smoked meats. Congrats!!!