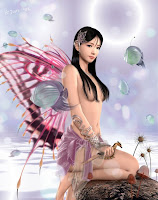 The ODBF put me on a quest to do some photoshop magic, i.e, to continue a point from a previous post about Freddy breaking a world record and like no one there to see it, so the idea was to photoshop a freddy jump into a football stadium full of people.

whatever, anyways, in searching around for pictures i happened upon this site.

A site not unlike this (notice the double negative, thats college for ya) and its a pretty standard run-down of hot girls in sporting events at the Olympics.

However, one caught our eye. Can you find it?

I understand the Sacramone and the Misty May thing, but, waterskiing isn't even an olympic sport...and Nymph?

In Greek mythology, a nymph is any member of a large class of mythological entities in human female form. They were typically associated with a particular location or landform. Others were part of the retinue of a god, such as Dionysus, Hermes, or Pan, or a goddess, generally Artemis.[1] Nymphs were the frequent target of satyrs.

Nymphs live in mountains and groves, by springs and rivers, and in valleys and cool grottoes. They are frequently associated with the superior divinities: the huntress Artemis; the prophetic Apollo; the reveller and god of wine, Dionysus; and rustic gods such as Pan and Hermes.

She is pretty good, but, I have a hard time believing that she lives in a mountain by springs and rivers.
By Dig Dug at November 18, 2008
Email ThisBlogThis!Share to TwitterShare to FacebookShare to Pinterest
Labels: CRB Girls, flaming cheese, greek mythology, i cant stay away, nymph not nympho you perv, olympics, rowboat off topic, whimsy