Outside the Box Thinking on Engines 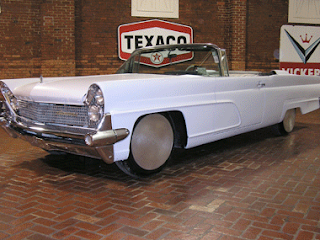 We brought you a while back the story, or whatever its called, on Neil Young and his innovative and odd pursuit of making a old ass Lincoln into the model for what can be accomplished with a little forward thinking about how engines, fuel and the like are used to power a car...remember?

Well, it has continued to push forward and they have entered the car, which still isn't quite operational, into the X-prize competition that awards teams for the best car that can get over 100 mpg.

This is pretty astonishing, not just the 100 mpg, but, the freaking size of this car and the technology that goes into it.

Now, this sort of thing is obviously not something that can be adapted to mass production, or semi-mass production...whatever its called for boat companies.

But, delving deeper into what they are doing and trying to do should hopefully shed a bit of light, and with a bit of imagination, provide you all with a glimpse of what is to come. Hopefully.

Despite gas coming back down below three bucks a gallon its still awful to fill up a boat, or a car, or a truck or a scooter.
By Rowboat Abides at October 15, 2008
Email ThisBlogThis!Share to TwitterShare to FacebookShare to Pinterest
Labels: even tho i am retired i still post more then the other losers on this site, gas technology, just give me a gallon of gas, more hippy