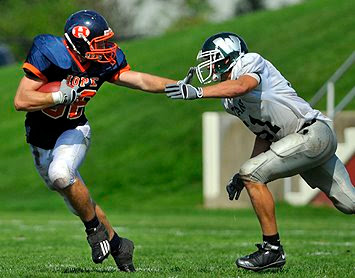 Okay, so, the first installment of the Kinda Weekly Football Rundown went over great. Think of Sarah Palin doing pole dances at a naacp convention. Meaning it was fucking AWESOME!!!

Well, sure, why not. Lets do it again.

Yes, thats a picture of the Hope College Demolition Football Team. What? Thats a stiff arm that your mom feels in the morning!

Oh, and for the sake of site continuity, here is the sort of low-down for our various roles in the new, improved and rad CRB.

Rowboat - that's me. Yeah, I said I was leaving. Well, thats not entirely true. It was decided in a closed door and highly secretive meeting that involved all the top brass and it was determined that the Rowboat is allowed to write about anything that doesn't involve waterskiing. Basically, my job is now, without the editor title hanging over my head, I am the CRB off-topic guru.

ODBF - taking over for the Rowboat. Meaning. well, who knows. I guess there will be a bunch of videos and asterisks, probably some poor formatting as well.

Minion - Um. think he quit or something.


And here is this week.

So, the biggest changes is that Florida Southern jumped up a bunch of places, while...well, nothing else major took place. Anyways, in the spirit of camaraderie and general collegiate atmosphere we present the top eight again.

Well, Jesus Christ, they had a bye week last week so they didn't play any footed balls. Way to come through ULM!!

Whoa...wait a min. What is this? This coming weekend ULM plays ULL in a no-holds barred game to determine once and for all the bestest collegiate waterski team of all time!!!

YOU PAY FOR THE WHOLE SEAT BUT YOU ONLY NEED THE EDGE!!!!

Just kidding, but, if you are interested you can see this 3 hour blood feud for world domination on the radio on the ULM, the Warharks, radio network.

Yeah, read right above. The Mad Max shit is happening this weekend. However, as opposed to the Warhawks, the Cajuns, RAGIN CAJUNS!! actually put their tight pants on and bashed helmets with another group of sweaty dudes last weekend, despite coming up short, losing 45-37 to Kansas State.

This drops their record to 1-3, with losses to Southern Miss, Illinois and now Kansas State.

Whatever, the Ragin Cajun himself...well, he has no rebuttal.

Thats the way you do it!!

Making the biggest jump, from barely in the top eight to number 3, the Florida Southern Moccasains, still don't have a football team. Yeah, and I burned whatever jokes I had last week on the stupid tight pants thing.

Either way, Florida Southern has some big news! Begining in the 2008 - 2009 season, they have a mens LaCrosse Team!! WOOOOO!! Cue the popped collars and AXE Body Spray!! 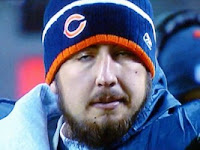 Nice loss to Michigan. Urban Dictionary defines that as, "Shit the Bed"

1) Making a mistake that many other people recognize as a mistake.
2) Fucking up...really bad

Jeff shit the bed when he hooked up with Marty instead of Ashlea.
by J Apr 9, 2003 share this add comment

entymology and usage: "shit the bed" comes from the unfortunate final humiliation when an animal's (yes, including human's) bowels completely relax at the point of death, causing the contents of the colon to be expelled. To use the term as a "euphamism" for biological death is considered to be in poor taste. It is more often colorfully used in definition 2.
1. That asshole Mr Jones never had a good word to say to anyone. At his funeral, the few attendees were secretly glad that he had shit the bed.

2. I was hoping that my car could be repaired, but the mechanic told me that it had shit the bed so I had it scrapped.

Ranked second in the AP polls after taking Georgia out behind the middle school and getting it pregnant. Wait, that doesn't really work in this situation...How about they went all American History X on their ass and stomped them against a curb?

Whatever, the then eight ranked Tide spanked the then third ranked Georgia Bulldogs, 41-30, yeah yeah yeah, your still coached by Nick Saban. Makes it tough to root for you.

Didn't Rykert and his sinful lake go there? No? Yes? Whatever, they also had a bye last weekend. So...ugh...that sort of ruins any fun to have with their game. However, they do have one of the cooler nicknames around, the Cyclones.

For whatever that is worth. 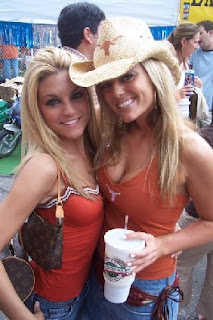 WOOOO have a great weekend everyone!
By Rowboat Abides at October 03, 2008
Email ThisBlogThis!Share to TwitterShare to FacebookShare to Pinterest
Labels: CRB Off-Topic, football and waterski do mix, top ten is for lame, weekly features that will only last a week