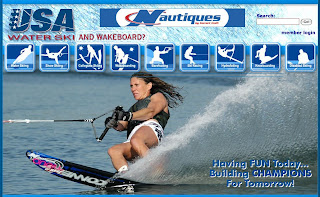 We have certainly been critical of the chasm between the "waterski" world and the "wakeboard" world here around the CRB. From our perspective, the sort of Us vs. Them aspect of the traditional waterski and the wakeboarders has been frustrating, tiresome and ultimately irritating.

In the most recent Executive Directors Report, Mr. Locke details the idea of changing the name of USA Waterski to USA Waterski and Wakeboard.

The crux of this argument is by changing the name USA Waterski will be able to tap into the wakeboard market and expand the USA-W reach within this sport.

However, what seems to be the genesis of this argument is after attending the Orlando Surf Expo was they felt they were "outta touch" with the current generation of water sports enthusiasts. That seems to be a fair, if not quite cerebral, thought for USA Waterski.

Any organization needs to be able to adapt, change and incorporate with the changes in culture, sport and attitude as needed. So, from that perspective this whole thing seems to be a pretty decent idea.

But, here is a quote, lifted from the report, from a person within USA Waterski.

“After attending this weekend at Surf Expo and talking with many of the industry's people, I have come again to the conclusion that USA Water Ski needs a name change. We need to be known as USA Water Ski and Wakeboard. We are seen as being so out of the loop in this industry and without a name that better represents who we really represent we will not grow our membership like we all want. By including the wakeboard segment of the sport we could tap many resources and members. But they just see us as 3-event skiers and the old crowd. We need to take a good look again at this and bring this organization into the 21st century. I know it will not be an easy sell to the old hard core skiing groups but many others will embrace the change and look forward to moving the organization to new heights.”

Hmm. Really? Your solution is a name change?

Lets look at this from a couple different areas.

1) Going to assume that people view USA Waterski as 3-eventers and the old crowd because that is what you are. For gosh sakes, to actually be having this debate proves that things are stuck in the olden days.

There is no reason why you should have to "sell" anyone on anything, it says right in the post that no one wants to join USA Waterski, you are sort of forced to for the insurance reasons and to host well run and structured tournaments.

So, then why the hell would any wakeboarder, or that industry as a whole, care or want to be part of USA Waterski? They seem to be doing just fine on their own.

2) The name itself. Look, the event was the Orlando Surf Expo. No where in there is the name Wakeboard, and yet they are still hip and on the cutting edge. So....why not rename USA Waterski USA Waterski - Wakeboard - Surf - and any other activity on the water that becomes fun for the peeps in the furture?

Thats silly. and Mr. Locke appears to know so, making fun of it himself within the post.

Tee Hee! That would make my check very difficult to write every year for sure.

Anyways, the whole point of this, and within that post it seems to tackle each issue fairly well, but, here is a very simple way of pointing out the issues that will come with changing the name. 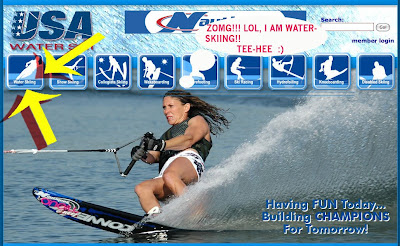 If that doesn't show up right, lets try a text way of describing it.

IT SAYS WATERSKING RIGHT THERE ON YOUR WEBSITE IS WATERSKIING!!!

I mean, my goodness, thats why it seems like you are 3-eventers and the old crowd!! YOU DEFINE WATERSKIING AS 3-EVENT SKIING!!!

It isn't!!!!! 3-Event skiing is just that, 3-event skiing. Its just one damn part of it, one discipline! Its not WATERSKIING!!

Gosh, whats that say for Show Skiers or Hyrdofoilers or whatever, what they do isn't waterskiing?

THERE!! Thats the problem!

Mr. Locke!! Make this happen!! The power of the CRB Compels you!!!
By Old Dirty Bass Fisherman at September 24, 2008
Email ThisBlogThis!Share to TwitterShare to FacebookShare to Pinterest
Labels: CRB POWER, The Industry, usa waterski