A new CRBer?
We had an anonomous article submitted to us from a person who went by the name "Canoe". Drive-by posting or new CRB contributor. Keep an open eye out, we have some new people joining our Rowboat in the near future. Is this a harbinger of things to come, or simply a tale woven from a insane rambling fool. Either way...here are some typed words.
It seems that hell itself a bit peeved this year at the Janesville Show Ski Team...not only did mother nature put a medieval bitch slap on their mugs, but, now, so has the NSSA.

"The National Show Ski Association has announced that the 2009 Division 1 Show Ski National Championships, the 35th annual event, will be held Aug. 7-9 in Loves Park, Ill."

Ouch. for those of you who happened to be in attendance at the show ski national tournament, yes, the one with all the tights, you witnessed a little bit of a sympathy ploy that came from the team that lost out to the ability to host the national tournament this year.

Well, karma can smite you with a cruel backhand. Loves Park, Ill, has been awarded the 2009 National Show Ski Tournament, which...if you know...was another of the, somewhere around 10 or so, ski team sites that were also underwater due to the their flooding in the Mid-West.
So be it. 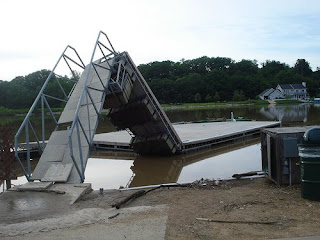 No one complained, everyone understood the problems that come with our sport and the cruel way in which mother nature can mess with your life. One needs to look no further then the Tommy Bartlett Ski Show, because, you know...their fucking lake was washed away, their lively hood for the foreseeable future in peril, and they didn't complain, they simply pulled their pants up, slapped on some shit kickers and kept the show going. no whining, no complaining, just ate their shit like men.
There is a lesson here for all, for every waterskiier out there. Quit bitching. Half the people on the skifly chat board can learn this lesson. No complaining without solutions, no anonymous bitching. Just action, results and effort. The foundation for a prosperous future.
By Old Dirty Bass Fisherman at August 28, 2008
Email ThisBlogThis!Share to TwitterShare to FacebookShare to Pinterest
Labels: Canoe, Nationals, Show Ski