Its been a little bit since I paddled away from the CRB, but, something, a mystical force it could be, or possibly a star is out of alignment, or the powers of light have struck me in the most unusual way.

Either way, I said I would check in from time to time, and well, here I am. 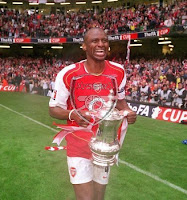 However, today's topic is not very deep or even that interesting. The rowboat happened to paddle into an oasis that had a glowing box on the wall with moving pictures in it. On said screen was a giant green field with full grown men in short shorts running around and kicking a ball all over the place.

What is this sport? They called it "soccer", which I think is a latin term that refers to the lack of testicles. Granted, there was a cranky navel officer in the next boat slip who was six boones farms deep, so, take his definition of Soccer with a grain of salt.

So, the point is this. There is this thing called the "UEFA Champions League" where all the best soccer teams in not-America play soccer against each other in some form of group/tournament play.

Really, it doesn't make any sense. Best I can tell there are like 8 billion teams, but, only a few, like Real Madrid, and Manchester United, and Chelsea are any good. the rest are a bunch of hobos and drug users that were picked off the street or out of a local wal-mart and given some fancy shirt and some boots (isn't that soccer code for shoes?)

Now, a few years ago The Sports Guy from ESPN.Com did a thing where he asked people to help him pick a team to root for. Well, the CRB is sort of looking for that too.

If anyone can explain what the hell the champions league is and whom we should be rooting for or paying attention, well, that would be great.

So, those are all the teams and everything. Some have cool names like Arsenal and Dynamo Kiev and Shakhtar Donetsk. Is soccer something worth watching or paying attention too? Everyone in the world says its the awesome, or radder then then sex or something. I mean, you don't see riots and ski tournaments do you?

So, for the people out there in CRB land, whats a lonely Rowboater to do? Give in to the surly sailer man? or venture out and explore this new sport?
By Rowboat Abides at August 28, 2008
Email ThisBlogThis!Share to TwitterShare to FacebookShare to Pinterest
Labels: CRB Off-Topic, posts from ghosts, rowboat, soccer?