Then I just kind of sit on my butt 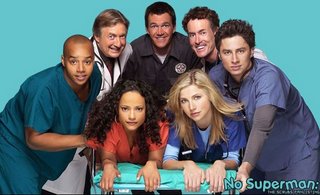 I can totally fix that little lady

As promised the folks at Alliance posted the video interview with Dallas about her injury and subsequent recovery.

Its interesting to watch, and she sheds some serious light on the "water in the lungs" aspect. Turns out it wasn't water at all, but some sort of fat cell issue that screwed things up.

"(I) went into surgery, thinking I was waking up in two hours. Then I had what was called a fat embolysm, which is, I guess, fat cells that go through your bone...err, not your bone, but your blood and clogs up your lungs, and thats when my lung collapsed and I was in some type of coma for 8 days"

Wow. I hate it when that happens. So, some crap went from her leg into her lungs and made it collapse right? Is that the gist of that?

But, here at the rowboat, we seek to delve deeper into the story then most. Lets get our learn on.

What is a Fat Embolism? Taken from emedicine.com:

Two theories about the syndrome exist. First, the mechanical theory states that large fat droplets are released into the venous system. These droplets are deposited in the pulmonary capillary beds and travel through arteriovenous shunts to the brain. Microvascular lodging of droplets produces local ischemia and inflammation, with concomitant release of inflammatory mediators, platelet aggregation, and vasoactive amines. Second, the biochemical theory states that hormonal changes caused by trauma and/or sepsis induce systemic release of free fatty acids as chylomicrons. Acute-phase reactants, such as C-reactive proteins, cause chylomicrons to coalesce and create the physiologic reactions described above. The biochemical theory helps explain nontraumatic forms of fat embolism syndrome.

No it doesn't at all, so we turn to the wiki man for some help. From Wikipedia:

"A fat embolism is a type of embolism that is often (but not always) caused by physical trauma." 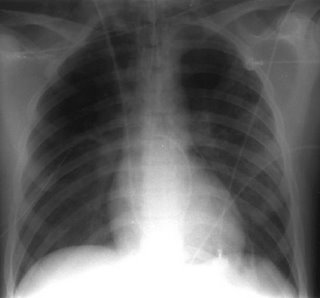 I guess thats what it looks like, so says this website.
A more detailed case can be found here, or maybe less detailed, but taken from the website uhrad.com, which is some sort of medical teaching website, explains the case of a 21-year old who got in a car crash, broke his leg and had this problem. So, it turns out that this is all on the up and up, so to speak. The following is copied straight from their site.

Clinical History: This is a 21 year old male s/p motor vehicle accident with multiple longbone fractures and sudden onset of shortness of breath of unexplained etiology.

Discussion: Fat embolism is an often unrecognized sequella of any condition or event that disrupts the marrow. The most common cause is traumatic fragmentation of bone marrow with its subsequent entry into the venous system.

The clinical manifestations of pulmonary embolus include both pulmonary and nonpulmonary findings. The pulmonary symptoms usually appear one to two days after the initial injury and generally include dyspnea, cough, hemoptysis, and pleural pain. Central nervous system and skin and manifestations may or may not occur concomitantly. The patient may develop confusion, stupor, delirium, and coma. In addition a skin rash (petechiae) often develops (characteristically on the patient’s chest).

The radiologic appearance is consistent with that of adult respiratory distress syndrome, including widespread airspace consolidation with a predominant peripheral distribution. In addition, the lung bases are often involved to a greater extent than with other causes of pulmonary edema.

OK, so, we got that covered, its an embolism caused by physical trauma. I would guess a snapped femur and nine spiral fractures and torn ligaments would qualify as trauma. However, lets look deeper and figure out what the hell an embolism is, also from the Wikipedia:

In medicine, an embolism occurs when an object (the embolus, plural emboli) migrates from one part of the body (through circulation) and cause(s) a blockage (occlusion) of a blood vessel in another part of the body.

This can be contrasted with a "thrombus" which is the formation of a clot within a blood vessel, rather than being carried from elsewhere.

Emboli often have more serious consequences when they occur in the so-called "end-circulation": areas of the body that have no redundant blood supply, such as the brain, heart, and lungs.

Yep, just like we thought. Some fat cells migrated their way into her lungs, clogged up the works and shut it down. Yikes. Of course, our main man Rykert is in the medical field so perhaps he could shed some light on this as well. 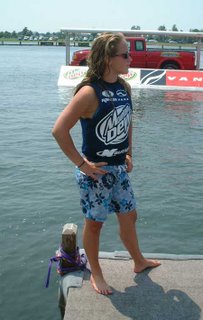 Hmm, someone needs to learn how to drive. That truck does NOT go there.
Links:
Dallas Video: (Alliance Wakeboard)
Fat Embolism: (Wiki)
Case One Hundred Thirty Four - Fat Embolism (uhrad.com)
By Rowboat Abides at November 11, 2006
Email ThisBlogThis!Share to TwitterShare to FacebookShare to Pinterest
Labels: Wake Board