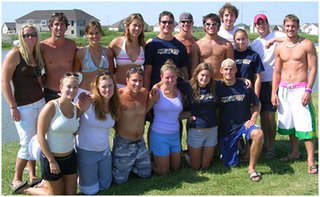 Holla at Marquette : Yo, D-Wade never made it to nationals!!

If you are reading this right now and you are a member of any of the teams listed below...I strongly suggest you quit reading this and get in your car and get moving.

For gods sake, its wednesday afternoon and you have to be skiing tomorrow or something!!

But for the rest of us, either not a part of one of these schools, or floating around in a freaking rowboat, we can view the events from afar...or on some website.

The NCWSA has set up some website to view results live...I guess. Click here for D1 or D2

Anyways, the CRB crew has to plead ignorance on the majority of the teams that are competing, we all know the normal power teams (ULM, ULL, Purdue, Hope, Etc) will be placing pretty high.

I look for the spirit of Kurtis Threlkeld to rage strong and push Purdue to the top in division one, while in D2 don't sleep on Cal-Poly. Allthough San Diego was the only D2 team to finish in the top three in any of the regionals. Hmm...

So, I was actually going to take all the teams scores from their various regionals and place them in some sort of order to in a way try and predict future results.

However, either Purdue is the best team ever assembled or shit doesn't translate from tournament to tournament. Why is this? I don't get it. Is it number of teams entering and thats how points are divided up or is it subjective, like, if you run 38 off and I run 38 off but I am rocking a speedo and a bra while you are wearing board shorts and a life jacket, then, the judges will obviously score my 38 off better because I did hit the double up at the end of this freaking long run-on sentance?

But, in the interest of complete and total journalistic integrity, here is the teams with scores from their regionals. They are sorted by their score from their regional tournament as an attempt to predict their future perfomance (read: Nationals).

This will end poorly.

Its stupid and maybe the CRB crew is dumb and doesn't know how to take the different tournaments and fix the scoring to make it the same from team to team and tournament to tournament...but...that doesnt matter now...its time for all the kids to get a move on....California love....Its the freaking weekend baby 'bout to have me some fun!!!

***UPDATE - The links above to live scoring don't work. Awesome.***