The passion of the Christ = Free fun for the whole family!! 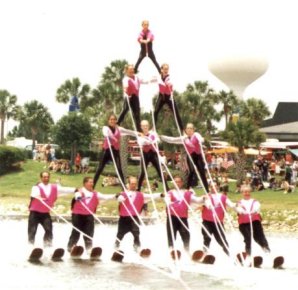 Worried about the lake level
When pastime is a passion, water-ski shows are free

That's the title of an article about show skiing? What the hell?

I can imagine some poor idiot trying to make a name for themselves or whatever sitting in front of the computer trying to come up with some copy for the Orlando sentinel about some dudes who waterski.

To be fair, why not, it could have been a decent write-up about a family, more specifically, a guy who enjoys show skiing with his family and how it allows them to do something they love together.

That passion is shared by Blais' wife, Robin, and their children, including 11-year-old Darby. The three are members of the Diamond Water Ski show team, which performed at Kissimmee Lakefront Park for the Fourth of July.

Darby, who looks as much at home on the water as on land, got her first taste of the ski-show business when she was 3, perched atop her dad's shoulders in front of a cheering crowd.

That sounds pretty good right? Not bad Mr. Steven Barnes...well written, well set-up for a little diddy on a cool family that likes to ski...

Blais said he and his friends used to ski about once a week on Lake McCoy, behind the home of a friend, Mike Dickson of Apopka. But for the past few months, low water levels have kept them off the lake.

"It just got too low to ski there safely," Blais said.

He said they could be returning to Lake McCoy soon, because recent rains are helping bring the lake back up.

At his home in Casselberry, a well-worn path leads to a covered sitting area near the dock, home to Blais' boat and a slide that helps keep the kids cool.

Beyond the dock, a series of floats serve as markers for the slalom course Blais and his ski buddies use for practice. The group has a ramp they tow out to practice their jumps, giving neighbors free entertainment.

"It's nice to sit out on the back porch and see the pyramid go by or see the barefoot- ers," said Larry Brown, who lives a few houses away from the Blais family. "We get the free show." 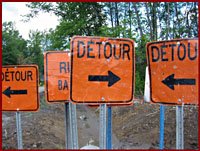 Whoa...Damn this mapquest crap
So, a nice story about a family turned into some weirdness about some low water levels, safety and some free-loading loser on his porch talking about free shows.

Dude, put down the non-alcoholic banana daquari and pitch in!!

O.K, so we had a slight detour into some non-sense, but, then the article gets bogged down in minutiae.

Though some barefoot skiers see it as cheating, Blais wears tennis shoes to protect his feet from the constant beating they take from skimming across the water at 42 mph. Ruff, while shoelace, has his own way of cooling his heels -- he sits down.

Switching effortlessly from a standing to a prone position, he slides along on his back, often spinning in circles like an aquatic break dancer.

At other times, he simply sits down on his bottom, feet extended toward the boat in a move he calls "butting out.

How is this even slightly relevant? What's the point? What are you trying to say? I like to ski and enjoy everything that comes with it, but c'mon man...put your thoughts together in a more linear fashion.

It doesn't take much to write about waterskiing, look at waterski magazine. They have made an entire magazine based on slalom skiing and fancy graphics. Its easy.

Here are some pointers.

1) What are you trying to convey to your readership?
2) Write about it.
3) Intro, Body, conclusion...Learned that in 6th grade. Stick to it.
4) Because something looks cool, or novel (barefoot in tennis shoes) doesn't mean it should be in a daily like the Sentinal.
5) Ask your editor to not cut off your nuts with a crappy title. 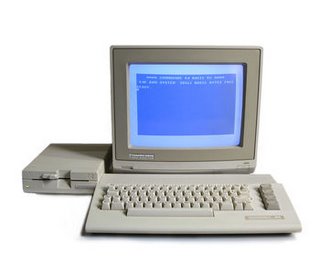 Oh Snap!! External floppy drive...thats hot!
Dude, fire up the word perfect circa 1994 and clean up that mess. The article is like a mullet, kind of works in the back and front...but slam it all together on one person and its a disaster wrapped in a nylon bowling league jacket after 25 PBR's and a criminal record.

Links:
When pastime is a passion, water-ski shows are free (Orlando Sentinel)
Posted by Rowboat Abides on July 14, 2006