Take me to your leader 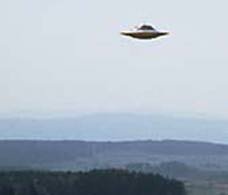 A mysterious pod was seen over the night sky just outside of Orlando the other day. It swooped low over Church Street in downtown Orlando. It was spotted again just over Pleasure Island.

Then, it flew away heading west.

It landed with a chunk or a ploosh in Polk City. People from miles around stared in awe at what was coming.

"A celestial occurrence right here in our back yard!!" they said.

Is the proof that Fox Mulder was looking for, will this prove life on other planets? The assembled masses stared in whispered to each other in hushed tones.

A light shone through the darkness...

The crowd of now close to 30,000 people drew a collective gasp of breath as they fixed their eyes on this man!!

Paradise by the dashboard lights
A mighty voiced boomed...

"USA Water Ski has announced that it has named Andy Jugan as the organization’s new executive director."

The crowd erupted into what can only be described as a riot-like, jubilant, testosterone filled mass of sweaty bodies as they cheered their newfound leader.

Andy emerged from the craft head held aloft in pride and took in the spectacle.

As the newly minted Executive Director of the fearsome USA Waterski organizationn, Andy is now to be welcomed to our world with open arms and a cold beer.

So, lets take a look at what we have here in our new man.

He was most recently the head of the Greater Louisville Sports Commission for the past six years. Prior to that he was the executive director of the Lubbock (Texas) Sports Authority and the Syracuse (New York) Sports Corporation.
He has a Bachelors degree from Western Michigan and Master’s from Bowling Green.

O.K, so know you you a little about the guy and what he has done. Lets take a peek at what he has to say about his new post.

"Although I have enjoyed a long and successful career in sports as an athlete, coach and administrator, I have always aspired to work for the United States Olympic Committee or one of the national governing bodies,"” Jugan said. "“USA Water Ski has presented me the opportunity to achieve that. My wife, Kathy, and I see this as a tremendous, exciting professional opportunity with a strong organization that has limitless potential for additional growth and development. I look forward to a long and successful tenure as executive director of USA Water Ski."”

Sounds pretty good so far. Basic stuff really. All thought, he should learn to speak in better sound bites.

"Crap, I really wanted that Olympics gig, but this will have to do, I guess we have some limited...oh...I meant Limited growth...errr...unlimited and and...screw it."

My only real gripe with that is simply that instead of saying that he was interested in running the sport of waterskiing and bringing it to new heights, you know something like...

"I have always loved waterskiing and I want more then anything to see this sport succeed on a national and international level with the television, internet and other media exposure that it deserves and gives the athletes the events, sites, money and exposure that they deserve."

Imagine this in the near future... 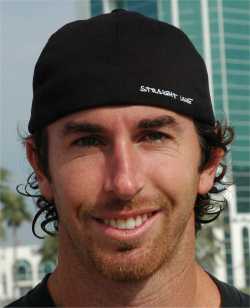 Why won't these ho's just back up off me?
Instead what we got was how he always wanted to run a national governing body and USA Waterski will do.

Note: This is not a slam on the man, nor am I upset in the hire. I hope he does well and grows our little sport. However, I just not really inspired.

That goes along with his personality and judging by this article in the Courier Journal in Louisville, seems to be his M.O as he addressed his successes as a member of the GLSC.

"His crowning jewel," Bisig said, "has to be the National Senior Games, which are headed to Louisville in '07."

Commission member Harold Workman said that some of the events Jugan brought to town "may not make the top line of the sports page, but they are really great events for the sports enthusiasts, and I think Louisville is well known for those type of events now, and we weren't before."

Maybe thats the idea, what USA Waterski was looking for. Maybe they are more realistic about the sport then I am. Its what I hate about things in general when I can't control them. I don't like being told that we are building for the future, or the foundation is being laid or other such trivial things.

BUT!! They did not contact me in regards to this search so maybe he is planning a big strategic shift in the culture of the sport where it will build slowly in the way that maybe something Arena Football did. 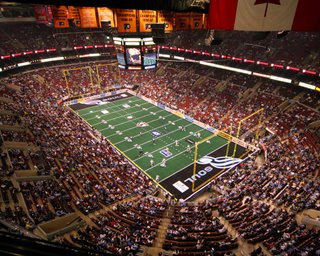 Ugh, dude, these acid trips are getting really literal
Arena Football was a fledgling organazation untill their golden goose, Kurt Warner, get hot and provided some juice for the league. But, they had built a strong foundation, a strong following and were able to jump on that opportunity, shuffle a few teams around with the previously Warner led Iowa team flee the corn and head to New York (I see you Rykert!) and secure a lucrative T.V deal out of it.

So, here is to our new head honcho, Andy Jugan, and here is to hoping that you kick butt.

Welcome to our world. 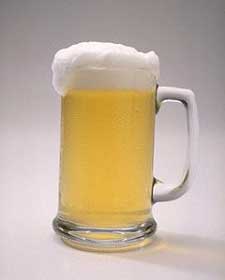