There is now a very interesting google feature lets you track where in the world things are searched for the most. Interesting that Madison, WI is the place where waterski is searched the most followed by Sydney, Australia and then oddly enough Salt Lake City, Utah.

Whew knew that waterskiing was a big deal in Utah. Evidently, its much easier to have a third when you can be married to more then one person. 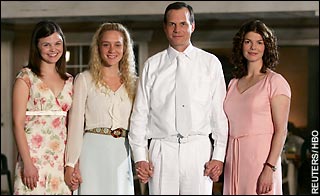 Hey wives, i want to take a set. Hop in!
Links:
Google Trends: waterski (google)
Posted by Rowboat Abides on May 11, 2006